Home » Age of the Gods: God of Storms 2 Slot

Age of the Gods: God of Storms 2 Slot

Join Aeolus on another adventure in the Age of the Gods: God of Storms 2 slot. This sequel from Playtech allows you to choose from 5, 10, 15, 20 or 25 paylines. Landing a fully stacked Argo ship wild to trigger the Wild Wind Respins feature. Each respins increases the number of rows up to 8 and paylines up to 90. There are also 4 progressive jackpots to be won at random.
Play Now

The Age of the Gods: God of Storms 2 slot comes with 5 reels, 3 rows and between 5 and 25 paylines. Go to the Lines box (below the reels on the desktop version) to choose either 5, 10, 15, 20 or 25 paylines. A winning combination is created when 3 or more matching symbols appear from left to right across any of the paylines. For the higher value symbols, you only need 2.

When it comes to stake/bet ranges, it depends on how many paylines you’re playing with. With 5 paylines, you can spin away from 1p to £100 a spin. If playing with 25 paylines, the bet range is from 5p to £500 per spin. There’s a Total Bet box below the reels (desktop version) where you can adjust accordingly.

If you’re not from the UK, you have 2 more options when playing. There’s a Turbo Mode for faster spins. You’ll also find an Auto Play function where you can opt for autospins until you trigger the main bonus feature.

The Age of the Gods: God of Storms 2 RTP is 96.14%. The progressive jackpots contribute 1.01% of this number meaning the actual return rate is 95.13%. For a jackpot slot, this is above the average. The volatility is in the high bracket with the bigger payouts coming from the main bonus feature. The hit frequency rate is 26.3% meaning over 1 in 5 spins will give you a winning combination.

The maximum win is 4,100 x your total stake. This can be won by achieving the maximum number of respins. The original slot offered max wins of 2,500 x stake by way of comparison. You also have the Age of the Gods jackpots with the biggest won averaging £488,000 (more details below).

The soundtrack comprises of winds blowing appropriately. Symbols on the reels include A, K, Q, J and 10 royals as well as a vase, Hydra (the serpentine water monster), an archer, Artemis (female warrior) and a Spartan warrior. The Spartan warrior is the best paying symbol giving you 0.2, 1, 8 or 20 x your total stake for 2, 3, 4 or 5 in combination.

Age of the Gods: God of Storms 2, like the original slot, has 2 wild symbols. You have a standard wild and an Argo ship wild which appear stacked and only on reels 2, 3 and 4 (the 3 middle reels). Both will replaces other symbols when part of a win with the Argo ship wild triggering the main bonus feature when it fills a reel (more details below).

Age of the Gods: God of Storms 2 Mobile

Created using HTML5 technology, Age of the Gods: God of Storms 2 is available to play on mobile, tablet and desktop devices. Whilst it does have superb graphics and animations, I recommend you play on a laptop or PC, especially when you can play with up to 90 paylines.

Age of the Gods: God of Storms 2 Bonus Features

The Age of the Gods: God of Storms 2 slot has 3 bonus features. Focused on respins, each respin increases the number of rows and paylines (up to 8 rows and 90 paylines). There’s also the small matter of 4 progressive jackpots which can be won randomly on any spin. 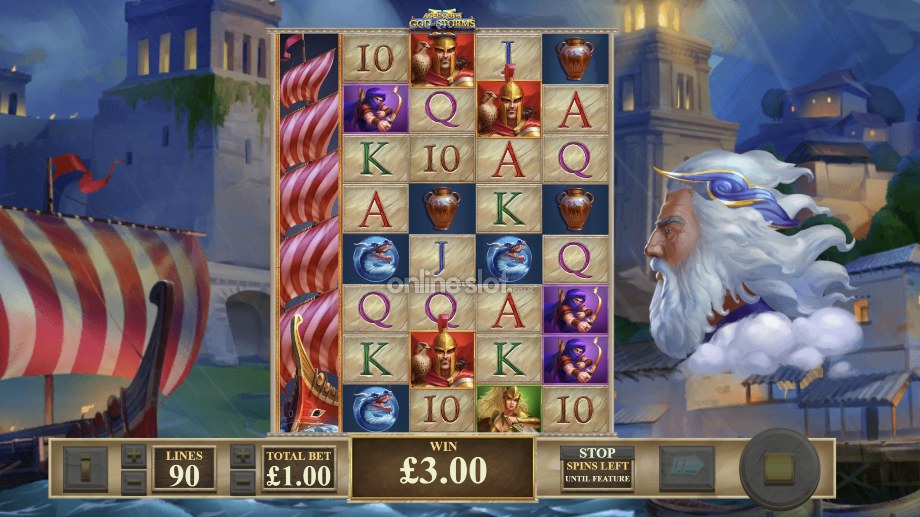 Landing 1 or more Argo ship wilds fully on reels 2, 3 or 4 during a base game will activate the Wild Wind Respins feature. The God of Storms (Aeolus) blows the Argo ship wild 1 reel left with each respin. As a result, the number of rows and respins increase. The respins continue until the Argo ship wild reel shifts completely off the reels.

For the maximum number of rows and paylines, you will need to land the Argo ship wild on reel 4. There’s a table below showing the number of paylines based on whether you’re playing with 5, 10, 15, 20 or 25 paylines. Known as the Extended Reels feature, each shift does the following:

During the feature, a maximum of 3 Argo ship wilds can land simultaneously on the reels. Also, stacked regular wilds can also appear. The difference from the original slot is that there’s no increasing multiplier (up to 5x).

Age of the Gods Jackpot feature

The Age of the Gods: God of Storms 2 slot game has an Age of the Gods Jackpot feature. This is a common offering in all Age of the Gods games. Randomly activated, you choose from 20 coins with the aim of matching 3. With 4 progressive jackpots up for grabs, you’re guaranteed to win a jackpot once you enter the feature.

The Ultimate Power Jackpot is by far the biggest and pays an average of £488,000 every 40 days. The biggest win recorded was £852,000 with the minimum amount you’ll win set at £100,000. Here’s a table showing all jackpots, the minimum amount (seed value) and the real-time jackpot:

by a9play
2 months ago
Hot News