Conjuring up a jackpot is the name of the game in the Fire Blaze: Blue Wizard Megaways slot, a 5 reel game from Playtech where the number of ways to win can reach 12,348. Packed full of magic and mystery, this slot comes with lightning bolt symbols that combine with wilds to deliver multipliers of up to 16x. There’s also a Free Games feature. Arguably the best of the lot though is the Fire Blaze Respin feature. This streak respin game delivers cash prizes and also offers a shot at landing jackpots worth 2,000 x stake.
Play Now

The Fire Blaze: Blue Wizard Megaways slot uses the Megaways game engine. It’s not your common Megaways setup though. For starters, the action takes place on 5 reels. As usual, the number of symbols that land on each reel changes with each spin.

The minimum number of Megaways is 108 but if all 5 reels contain the maximum number of symbols, you’ll have 12,348 Megaways. Unlike many Megaways slots, cascading reels are not used here. When a spin is complete, that’s it, regardless of whether it’s a winner or loser.  To create a win, land 3, 4 or 5 matching symbols or wilds on adjacent reels, starting from the leftmost reel.

As usual for a Playtech release, there’s a huge range of stake options to choose from. Bets range from 10p to £250 per spin. Choose what you’re comfortable with. Click on the i icon to open the paytable. It’s all very clear to follow with payout amounts displayed in cash relative to your current stake.

The Fire Blaze: Blue Wizard Megaways RTP is 96.47% which is well above average. Medium to high variance, you’ll get frequent wins but on the smaller size.

The max win is 10,000 x your total stake, which is much higher than the original Blue Wizard slot. 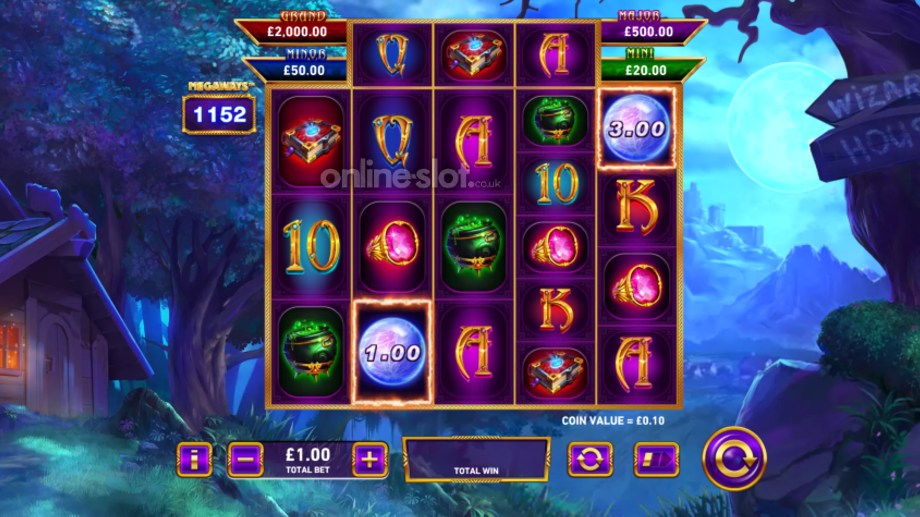 With a sorcerer/magical theme, there’s a suitably mystical quality to the design in the Fire Blaze: Blue Wizard Megaways slot game. This is the Megaways version of Blue Wizard which also has Fire Blaze Jackpots.

Bathed in light from the moon, you’ll see a castle in the distance and the Wizard’s cottage home to the side of the reels. Accompanying the on-screen action is a rather haunting soundtrack which again matches the magical theme nicely. It all comes together well to deliver plenty of atmosphere.

Joining the golden A to 10 royals on the reels are a ring, book of spells and cauldron full of potions. The top standard symbol is the owl which pays 5 x your total stake if you land 5 in combination.

The bearded wizard in the blue cape is the game’s wild. This replaces all the standard symbols in a winning combination then it lands on the middle 3 reels. There are also lightning bolts, crystal balls and castles which can all trigger special extras (more on this below).

The Fire Blaze: Blue Wizard Megaways slot game is available to play on all devices including desktop computers, tablets and smartphones. As it has 5 reels and up to 12,348 Megaways, it works rather well on mobile devices which are smaller.

Playtech has packed plenty of variety into the Fire Blaze: Blue Wizard Megaways slot, to the tune of 3 bonus features. Boosting your winning opportunities are wild multipliers worth up to 16x, free spins and the Fire Blaze Respin feature.

The lightning bolt symbol can only land on the horizontally spinning positions at the top of the reels. Land a wild directly below a lightning bolt on reels 2, 3 or 4 and the Lightning Wild Multipliers feature is triggered. A multiplier of 2x, 4x, 8x or 16x will be applied.

Land 3, 4 or 5 castle scatter symbols anywhere on the reels on the same spin and you’ll pocket an award equal to 1, 10 or 50 x your total stake. You’ll also trigger the Free Games feature.

You’ll then receive 6 free spins. On each free spin, the symbols in the horizontally spinning reel shift 1 position to the left. Also, there’s a higher chance of lightning bolt symbols will land meaning multipliers up to 16x on each free spin.

Unlimited retriggers are possible. You can also trigger the other feature, the Fire Blaze Respins from the free spins as well as the base game.

Those triggering Crystal Balls lock in position and 3 respins are awarded. If a new Crystal Ball lands, it too is held and the respins reset to 3.

When you’ve run out of respins, any star symbols transform and award the Mini, Minor or Major prize and then added to all the cash values attached to the Crystal Balls. To land the Grand Jackpot, you need to fill all the positions on the game grid with Crystal Balls or stars. Here’s what the fixed jackpot prizes are worth:

by a9play
4 months ago
More Games

Register as a9play agent to promote perdana 4d
2 months ago

How to Increase the Winning Rate With Perdana 4d and Magnum Toto Kuda Lottery?
2 months ago
Casino Provider