by
PlayTech
There aren’t many online slots that match their name quite as well as the Jackpot Giant slot. This prehistoric-themed game from Playtech does so thanks to the volcanic, life-changing jackpot it can deliver. Like its Stone Age theme, the gameplay in this 5 reel, 50 payline offering is rather basic. The only feature is a pick me round that can deliver some decent action. The main attraction of course is the progressive jackpot which on average pays out £4.5 million whenever it explodes into life
Play Now

The action in the Jackpot Giant slot takes place on a 5 reel, 3 row, 50 payline machine. Winners are formed by landing 3 or more matching symbols or wilds in one of those paylines, starting from reel 1.

Stake levels range from 50p to £4 per spin. Remember, to have a shot at landing the big progressive jackpot prize, you need to be playing at the maximum stake level. There’s an AutoPlay function where up to 99 autospins can be chosen.

The Jackpot Giant RTP is 94.22% which is a little on the low side but it’s fairly typical of a jackpot slot. Progressive jackpots aside, the volatility here is in the medium range meaning there a balance between frequency and size of payouts. It’s not too explosive but these volcanoes aren’t exactly dormant either.

The maximum win per spin is 50,000 x your total stake. This is won by filling all reels with wilds. You can win a lot more from the progressive jackpot.

Theme – head back to the Stone Age 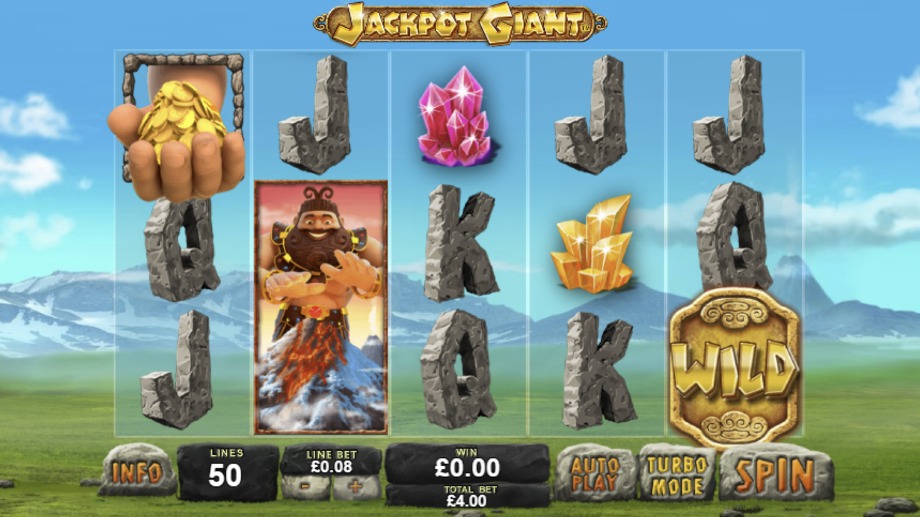 The design in Jackpot Giant slot is excellent. Set in the Stone Age, it has a prehistoric theme. There’s a cartoonish feel to the visuals which are simple but bright colourful and rather jolly. It’s not the height of sophistication but the imagery works very well here.

The soundtrack is rather generic but isn’t too distracting. Overall, Playtech has done a nice job with the design in Jackpot Giant, especially for a slot that was released as far back as 2015.

With green fields, mountains, volcanoes and blue skies in the background, the reels feature A to J royal symbols that appear like stone monoliths. The 2 medium value symbols are the pair of Stone Age cavemen which can both appear in stacked formation and can give your payout potential a timely leg up.

The most rewarding symbols are the 3 crystals. The best of the 3 is the pink crystals symbol. Land 3, 4 or 5 of these on a payline and your reward is 2, 6 or 10 x your total stake.

You can try your luck on Jackpot Giant on all devices including mobile and tablet. The simple, bold design and straightforward gameplay make it a good pick for mobile play. You can, of course, land the big progressive prizes in playing on your mobile too.

The gameplay in Jackpot Giant is very simple. This isn’t a slot that overloaded with extras. These not much to report in the way of extras other than the Giant Bonus feature which is a variation on the classic pick me round. Then, of course, there’s the progressive jackpot. 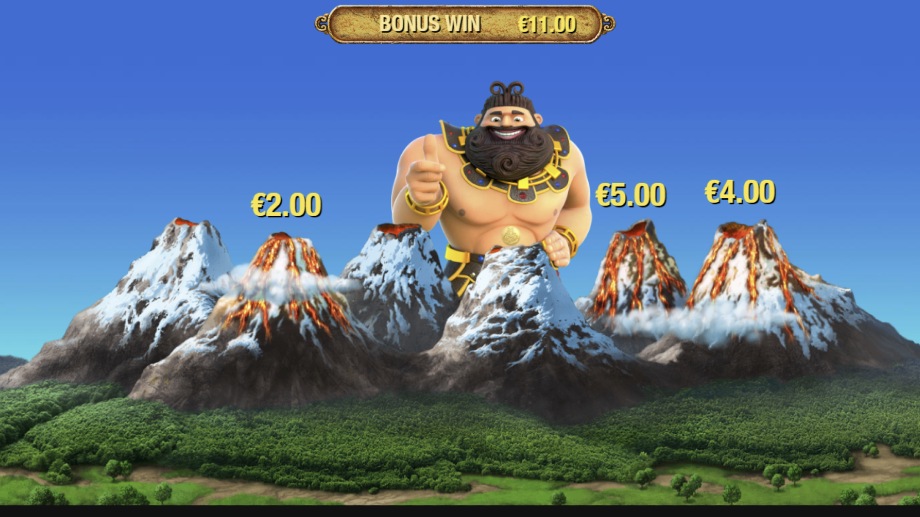 The Giant Bonus feature is triggered by landing the volcano bonus symbol on reels 1 and 5 on the same spin. You’ll then be presented with a selection of 6 volcanoes. Choose 3 of them.

The giant caveman will toss a coin into each chosen volcano unleashing a torrent of gold coins to reveal the precise amount you’ve won. You could also get an Extra Pick or scoop all 6 cash prizes if fortune is smiling and you land the Win’Em All option.

To be in with a chance of landing the progressive jackpot, you need to be playing at the maximum stake level of £4 per spin. If you play at lower stakes, the maximum you can win is 1,000 x your total stake by landing 5 wilds across the middle of the reels

To win the progressive jackpot, you’ll need to land 5 wilds symbols on payline 1. You would need to land to wild across the middle of all 5 reels.

It’s worth noting here just how big the Jackpot Giant payout can get. The average jackpot payout is £4.5 million. The awards can get much, much bigger than that though. With only 4 winners at time of writing, here are the amounts won from the Jackpot Giant progressive jackpot:

by a9play
2 months ago
More Games