Home » Legacy of the Tiger Slot

Legacy of the Tiger Slot

by
PlayTech
Head to the sultry jungles of Asia in the Legacy of the Tiger slot, another game in Playtech’s Mega Fire Blaze Jackpots series. It’s a volatile 5 reel, 50 payline title that comes with a couple of potentially explosive bonuses. Landing 3 scatters awards 8 free spins. The middle reel during these free spins is made up of wilds and moon symbols which boost your chances of triggering the second feature. The Mega Fire Blaze Respin feature is a streak respin round where you could also pick up 1 of 4 jackpot prizes up to 2,000 x stake.
Play Now

The action in the Legacy of the Tiger slot takes place on a classic 5 reel, 3 row machine that offers 50 paylines. All wins pay left to right starting from reel 1. You will need 3 or more matching symbols to do so.

You can try your luck in this jungle adventure at stake levels starting 10p per spin up to £500. Just use the arrow keys below the reels to adjust up or down. Autoplay is available for anyone outside the UK if required too. You can run up to 100 autospins or leave them going until you trigger a feature. There’s a quickspin mode too but no options for win and loss stop limits.

The maximum win is 10,000 x stake per spin, which is pretty good and higher than a lot of older and newer slots out there today.

The design in the Legacy of the Tiger slot is relatively simple. Set against a jungle backdrop, you are taken to the jungles of Asia. The backing track combines the sounds of the jungle and the roars of the animals alongside the ambient noise you’ll find playing a live casino slot. It’s not the most obvious choice for a slot with this theme but works well enough.

The plain blue reels are made up of A to 10 royals covered in creepers and an assortment of wild animals.  They include a toucan, crocodile, snake and orangutan. The orangutan symbol is the highest paying giving you 3 x your stake for 5 in combination. They’re all comic book style and are nicely done without being too fussy.

The tiger is the game’s wild. This replaces all the standard symbols when it makes up part of a winning combination. The wild can also expand to fill a whole reel. It pays up to 3 x stake per payline.

Legacy of the Tiger Mobile

You can play this slot on all devices including PC, tablets and mobile. The Legacy of the Tiger slot on mobile works just fine. The simple but colourful design is clear and the gameplay straightforward, but we do prefer it on a larger screen.

Legacy of the Tiger Bonus Features

There are 2 classic features included in Legacy of the Tiger. As well as a free spins bonus, there’s the Mega Fire Blaze Respin feature which is a streak respin round that can award instant cash and jackpot prizes. Playtech has added a twist in the mix by bringing multipliers into play too. Let’s dig deeper and expand on how they all work.

The mysterious jungle woman is the game’s scatter symbol. Land 3, 4 or 5 of these anywhere on the reels on the same spin and you’ll pocket an award of 1, 10 or 50 x your stake. You’ll also activate the Free Games feature and with it, 8 free spins.

During those free spins, the middle reel is edged and will only include wilds or moon symbols which are the key to unlocking the game’s second feature, the Mega Fire Blaze Respin feature, which leads us nicely on. 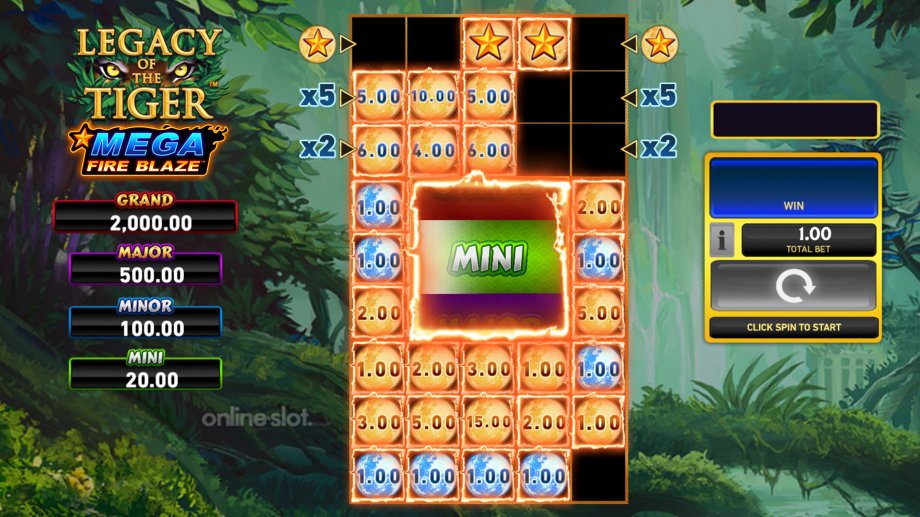 This round triggers when you land 6 or more moon symbols anywhere on the reels in the base game or the free spins. Each moon comes with a cash value or a jackpot star attached.

The moons from the triggering spin are held and 3 respins are awarded. If a new moon symbol lands, it too is held and the respins tally reset to 3.

Keep a special eye out for moon symbols that come with a key attached. Collect 2 of these and you’ll unlock an extra row on the grid. If a Moon symbol appears on the unlocked 7th row, the attached prize comes with a 2x multiplier boost and is doubled.

Things improve further if you manage to unlock the 8th row. Any Moons that appear here have their cash prize boosted by a 5x multiplier.

If you manage to open up the 9th reel, any Moon symbol that appears will automatically turn into a Jackpot Star icon and award the associated prize. Any Jackpot Star that lands during the respins transform to award 1 of the 4 jackpots:

by a9play
2 months ago
More Games