by
PlayTech
Based on the Oscar-winning movie about a mighty Roman warrior, the Gladiator: Road to Rome slot is a progressive jackpot game from Playtech that can deliver potentially life-changing payouts. Played using 5 reels and 25 paylines, it comes with a cracking Colosseum Free Games feature where picking shields can deliver a host of modifiers including multipliers, added wilds, payout boosts, scatter pays, nudges and extra free spins. The main attraction here of course is the Gladiator Bonus feature where you’ll have an opportunity to scoop an enormous progressive jackpot prize.
Play Now

The action in the Gladiator: Road to Rome slot plays out on 5 reels, 3 rows and 25 fixed paylines. Land 3, 4 or 5 matching symbols or wilds from left to right across a payline, starting from reel 1 and you’ll form a winning combination.

Stake levels here range from 25p to £125 per spin. Adjust your stake using the + and – buttons below the Total Bet box. In some countries, there is an Auto Play function where you can choose from 10, 25, 50 or 99 autospins. This is available in the UK until the end of October 2021.

The Gladiator: Road to Rome RTP is 95.05%. The jackpot contribution is just 1% meaning the actual return rate is 94.05%. This is high for a jackpot slot game.

The volatility is in the medium range. Jackpot aside, the most you can win from a single spin is 30,000 x your total stake. That’s the maximum 5,000 x stake win boosted by potential 9x multipliers (more details below). When it comes to the jackpot, the average is over £815,000.

The Gladiator: Road to Rome slot is the official game for the Gladiator film (2000) directed by Ridley Scott. The movie  proved to be a smash hit with critics and moviegoers alike. As a result, it won multiple awards and was the second highest-grossing film of 2000.

The movie centres on Maximus Decimus Meridius (Russell Crowe) a Roman general who is double crossed by Commodus who then seizes the Roman emperor’s throne. Reduced to slavery, Maximus becomes a Gladiator and fights his way to redemption in an attempt to avenge the murders of his family and the old emperor. Anyway, the design in this slot adaptation is true to the source material.

Set against a backdrop of an impressive Roman amphitheatre (the Colosseum), symbols appear on stone blocks. Joining the lower value A, K, Q, J, 10 and 9 10 royals on the reels are a cast of characters from the movie. They include Tigris of Gaul (Sven-Ole Thorsen), Proximo (Oliver Reed), Lucilla (Connie Nielsen), Commodus (Joaquin Phoenix) and the Gladiator.

The most lucrative symbol is the Gladiator. Land 5 of these across a payline for a payout of 40 x your total stake. If you manage to land the Gladiator symbol fully stacked, it transforms into a wild and substitutes for all the standard symbols when it makes up part of a winning combination. Even though Russell Crowe plays the main character in the movie, he doesn’t appear in the slot game – probably due to image rights.

There are 2 different scatter symbols, both of which can trigger a bonus feature if you land enough of them on the same spin. Here’s a list of all symbols with payouts and information:

Gladiator: Road to Rome has been fully optimised using HTML5 technology. This means it can be played on all devices including desktops, tablets and mobiles. The 5×3 layout works well on handheld devices too.

With 2 bonus features, there are some very tasty extras on offer in Gladiator: Road to Rome. Trigger the free spins and your winning chances are boosted by a host of potential modifiers. What has really made this slot such a fan favourite though is the progressive jackpot. 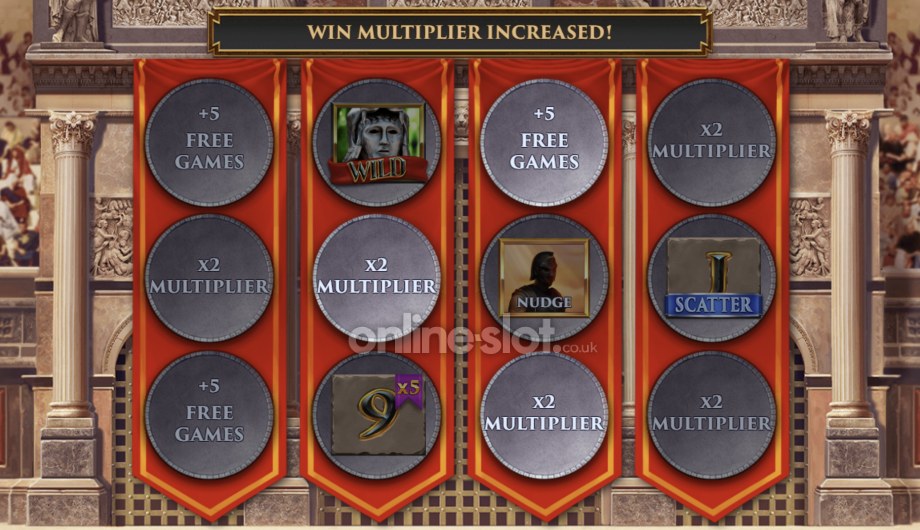 Trigger the Colosseum Free Games feature by landing 3 or more weapon scatter symbols anywhere on the reels on the same spin. 3, 4 or 5 scatters will give you 5, 8 or 12 free spins. Not a huge allocation, we grant you. There are still plenty of winning opportunities available here thanks to the range of modifiers.

Before the free spins begin, pick from the collection of shields. You’ll get 3 picks which can deliver the following modifiers:

Land 3 free games scatters during the feature and you’ll receive another round of 5 free spins. The same modifiers from the original trigger are active during this new set of free spins. You can retrigger infinitely for unlimited free spins.

The ideal scenario, in my opinion, is to pick the Win Multiplier 2 times as it can result in a 6x multiplier being applied to each win. Add the Symbol Payout Boost which gives a symbol a 5x boost.

The Gladiator Bonus feature is triggered by landing 3 helmet bonus symbols. You’ll then get to pick from 9 helmets which award bronze, silver and gold prizes.

Each helmet will give you a cash prize. Gold helmets are worth the most naturally. If you uncover 9 gold helmets, you’ll win the progressive jackpot. The current jackpot is £1,095,095.41 .

The Gladiator: Road to Rome Jackpot delivers an average jackpot prize of some £815,000 but can get much bigger. The biggest jackpot paid out from this Roman epic is over £2.7 million. The seed jackpot is £50,000 which is the minimum amount you can win. On average, the jackpot lands every 13 and a half weeks.

The Walking Dead Slot
Survive the apocalypse in The Walking Dead slot. Created by Playtech, it comes with 5 reels and 50 paylines. Based on the popular TV series, it’s the official game for AMX’s thrilling zombie drama. With a The Tower feature where you can win cash prizes and 4 fixed jackpots, there are 5 free spins features which give you wild reels, multipliers shifting coin stacks, respins and more coins.
Play Now
Hot News
Top Site To Download A9play For Free
3 weeks ago