by
PlayTech
Get ready to play with fire in this Joker Hot Reels slot powered by Playtech. It’s a classic slot machine style game with 5 reels and 5 paylines. With win both ways technology, you can play from 5p a spin on all devices. It comes with stacked Joker wilds, and when they land on the 3 middle reels, you will trigger the Joker’s Respins feature to give you a frozen reel and 3 respins. This can lead to 3 fully wild reels. There’s also the randomly activated Joker Jackpot feature where you can win the Mini or Grand progressive jackpots.
Play Now

Stake levels cater to all bankrolls as you can play from 5p to £500 per spin. With a Turbo Mode available for quicker spins, there’s also an Auto Play function where you can opt for up to 100 autospins. You can also play until you trigger a bonus feature. But please note that autoplay and turbo mode is only available for players outside the UK.

The Joker Hot Reels RTP is 95.51% overall. The RTP without the jackpot element is 94.52% meaning 0.99% is for the 2 progressive jackpots. Medium to high variance, most wins will be medium to high size but won’t land as frequently as a slot with lower variance.

Jackpots aside, the max win is 6,000 x your stake in 1 spin, which is quite generous. 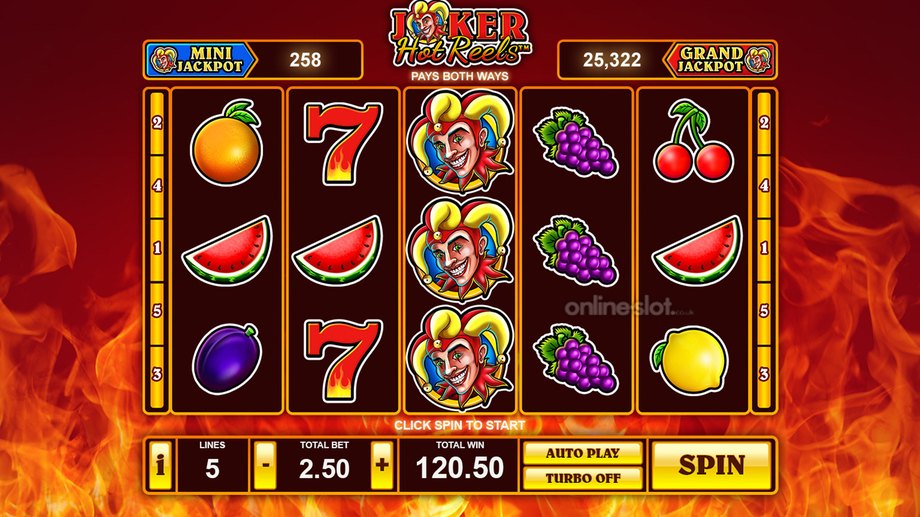 The Joker Hot Reels slot has a slot machine theme and is as simple as they come. Based on a joker, you will see flames in the backdrop. Visually, it’s very basic but that’s the intention. The sounds are also simple and will remind you of an old-school fruit machine.

On the reels, you will see classic slot symbols. There are cherries, lemons, oranges, plums, grapes and watermelons. Then you have a flaming lucky red 7 symbol which is the most valuable. 3, 4 or 5 in combination pays 10, 40 or 300 x your total stake respectively.

The Joker symbol is the wild. As well as substituting for all symbols to make the best possible winning outcome, it appears on all 5 reels. However, it only appears stacked on reels 2, 3 and 4 (the 3 middle reels). 5 wilds in combination will pay 300 x your total stake.

Despite being basic visually, Joker Hot Reels can be played on mobile, tablet and desktop devices. The simple 5×3 reel layout works well on smartphone screens and it’s an enjoyable slot to play on smaller devices.

The Joker Hot Reels slot comes with 2 bonus features. First, you have the Joker’s Respins where stacked wilds give you respins. This can lead to 3 fully wild reels in play. Then there’s the Joker Jackpot feature where any spin can randomly give you 1 of 2 progressive jackpots. Let’s explain them both in more depth. 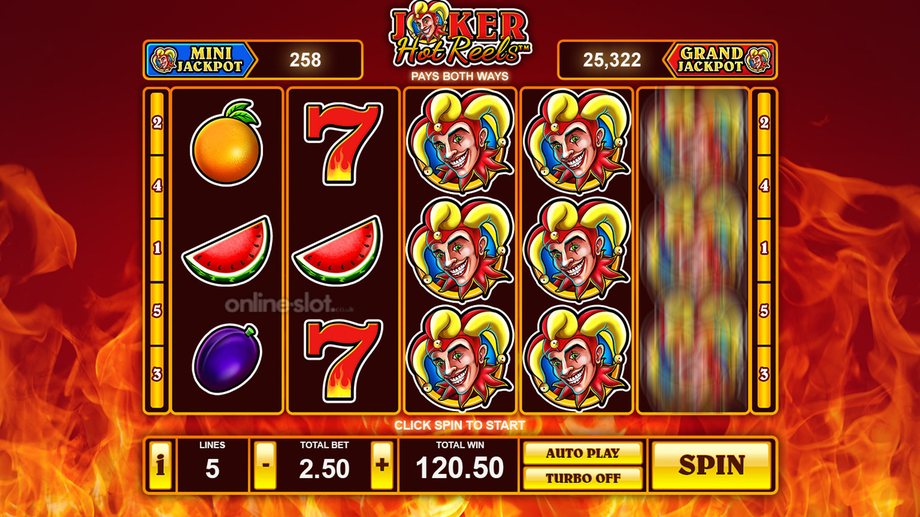 The Joker Jackpot feature is randomly triggered. This will lead to you winning either the Mini or Grand Jackpot. Both jackpots are progressive with the Grand Jackpot being the biggest.

The Walking Dead Slot
Survive the apocalypse in The Walking Dead slot. Created by Playtech, it comes with 5 reels and 50 paylines. Based on the popular TV series, it’s the official game for AMX’s thrilling zombie drama. With a The Tower feature where you can win cash prizes and 4 fixed jackpots, there are 5 free spins features which give you wild reels, multipliers shifting coin stacks, respins and more coins.
Play Now
Hot News
Top Site To Download A9play For Free
3 weeks ago