Survive the apocalypse in The Walking Dead slot. Created by Playtech, it comes with 5 reels and 50 paylines. Based on the popular TV series, it’s the official game for AMX’s thrilling zombie drama. With a The Tower feature where you can win cash prizes and 4 fixed jackpots, there are 5 free spins features which give you wild reels, multipliers shifting coin stacks, respins and more coins.
Play Now

The Walking Dead slot comes with 5 reels, 3 rows and 50 fixed paylines. Winning combinations are formed with 3, 4 or 5 matching symbols start from the leftmost reel and have to appear on consecutive wins and on the same payline.

When it comes to bet levels, you can spin away in this zombie thriller from 10p to £500 a spin. There’s a Bet coins icon to the side of the reels. Click on this and then click on the plus and minus buttons to adjust accordingly. In some countries, there’s a Turbo Mode for faster spins and Autoplay function for autospins.

The Walking Dead RTP is 95.73% which is just below the 96% slots average. For a branded slot, the return rate is pretty good. The variance is in the medium range with big wins available in the base game and various bonus features.

The hit frequency rate is 28.81% meaning over a quarter of spins will result in a winning combination.

The maximum win is 2,198 x your total stake. This can be won from The Tower feature with the coins containing cash values and fixed jackpots. It will take approximately 272,331 spins to win over 1,000 x stake.

Theme – survive the apocalypse in this official branded slot 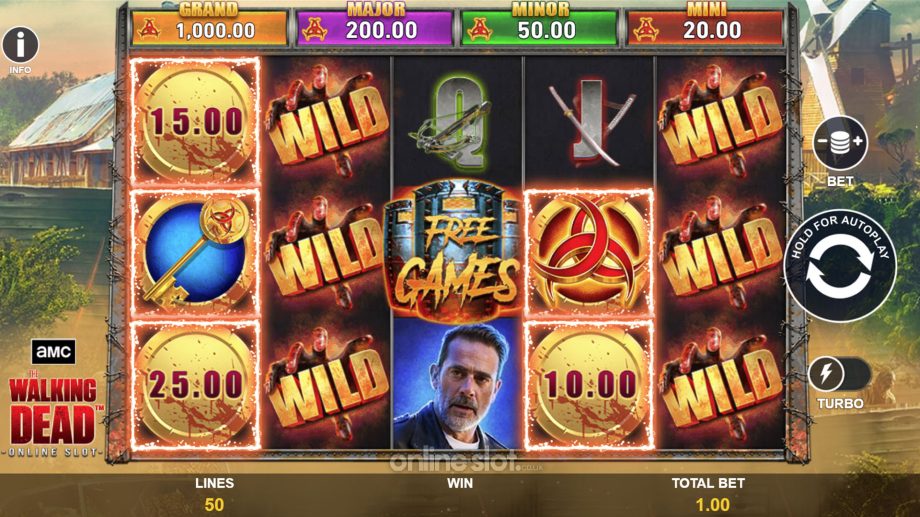 With a zombie apocalypse theme, The Walking Dead slot is the official game for The Walking Dead television series. Created by Playtech in co-operation with series producer AMC, the award-winning series comes to life in online slot form. Set in Alexandria, the soundtrack is eerie and intense which adds to the atmosphere. It depicts the nature of the TV show.

Symbols on the reels include A, K, Q and J royals which all have weapons on them. Then you have 5 character symbols: Negan, Michonne, Daryl, Carol and Rick Grimes. Rick Grimes is the best paying symbol giving you 0.2, 1 or 3 x your total stake for 3, 4 or 5 across any of the 50 paylines.

The hand is the wild symbol. It substitutes for all symbols bar the scatter and coin symbols, it pays like Rick Grimes (up to 3 x stake). With the 2 or 3 wilds appear on the same reel, it transforms into a zombie wild. The 3 shields symbol is the scatter. Coin symbols appear on the reels to display a cash value, key or Biohazard Sign (more details below). Here’s what each symbol pays:

Playtech has created The Walking Dead with the latest HTML5 technology. This means you can play the game on laptop, PC, mobile and tablet devices. The game has been optimised for iOS, Android and Windows operated devices. The 5×3 setup works well on mobiles too.

The Walking Dead slot has 6 bonus features. With The Tower feature giving you cash prizes and 4 fixed jackpots, there are 5 free spins features with wild reels, multipliers, shifting stacks of coins, Wild Walkers wild reels, respins and coins which can lead to more cash prizes.

The respins continue until they run out or you’ve filled the grid with coins. Finally, there are 4 fixed jackpots to be won within The Tower feature. Each Biohazard Sign coin will award 1 of the 4 following jackpots. Here’s what they’ll award:

3 or more shields scatters landing anywhere on the reels will activate the Free Games features. 3, 4 or 5 will pay 1, 10 or 50 x stake respectively.

With 6 free spins awarded, a wheel appears which will randomly selected 1 of the 5 free spins features. During any of the features, 3 or more scatters will give you 6 additional free spins. Here’s what each of the features offer:

The Horde Free Games feature: each wild and coin symbol landing on reels 2, 3 and 4 will expand to fill the reel. Getting coin symbols will lead to The Tower feature.

Saviors Free Games feature: each wild and coin symbol landing on the 3 middle reels will get a random multiplier. Each position on those reels gets its own multiplier. These multiplies are additive meaning their values are added together. Biohazard Sign coins are not multiplied though.

The Whisperers Free Games feature: up to 3 reels can appear as special reels with unique graphics. These special reels will contain only wild and coin symbols. Landing 6 or more coins simultaneously will activate The Tower feature.

How to withdraw from A9play or A9 Today
2 months ago

How to withdraw a9play agent commission
2 months ago